Every woman has a story that involves men and being scared and/or intimidated which causes the woman to change and/or adjust her plans.  This is not a new thing, #notallmen and the response #yesallwomen are very typical of how discussions of gender inequality go in respect to these stories.

This story starts with a camping trip that myself, a friend, and her two small children went on.  We originally planned to stay two nights.  The first night the guy from the next campsite invited himself over to say hi.  Turns out he was quite drunk and toed some lines with the children that made my friend very uncomfortable.  Eventually we sent the kids to bed and used that as an excuse to kick the guy out of our camp.

Pause on the story (because it doesn’t end here).  Before you start to “solve” our camping dilemma… yes there were some things my friend and I could have done differently, and yes there were some things the guy should have been more conscious of, and yes there was a bunch of campers who did NOT stop by to say hi so we recognize that most male campers did not invade our space.  Who we are and what we value change what we could have done to avoid the situation – the possibilities are endless – but we did the best we could with what we knew and what we believe.

Back to camping… the next day we changed to a different site in the same campground and had a lovely day.  That is, it was lovely until we were finishing dinner and my friend noticed the guy from the previous night driving multiple times around the camping loop.  He then proceeded to stop and set up camp directly across from us.  This creeped us out to the point where we immediately packed up and went home despite already having paid for the second night of camping.  The best possible spin we could find for his behavior is that he thought he was protecting two women camping with kids.

Gender equality could help avoid situations like this, or at least make it more obvious if we should have been creeped out.  Ideally in a gender equal society the guy would have asked if we wanted him to keep an eye out for us.  Ideally in a gender equal society we would have been able to ask him to leave us alone (no excuse needed) without feeling there was a risk of escalating the situational danger.

When telling a story of gender inequality, like this one, there are so many “moral to the story” options that are counter-productive to actually forwarding the cause of gender equality.  Often stories can come across as blaming or woe-is-me.  Also, when hearing a story of gender inequality like this one, it is so easy to try and solve the situation or disassociate from the circumstances (i.e. “That would never happen to me, I’m smarter than that.”).  Often responses can come across as victim blaming or defensive.

If we can tell a story without blaming a group or stereotyping.  If we can receive a story without feeling attacked.  If we can reach deeper to the social cause of the situation and recognize that gender equality is so much more than equal opportunity.  If we can do these things and then change our behavior toward those around us then we have started on the road to a more equal society.

What is your response to the story?  Do you think I told it in the spirit intended with this post?  How do we break out of typical?  How do we recognize and change our behavior? 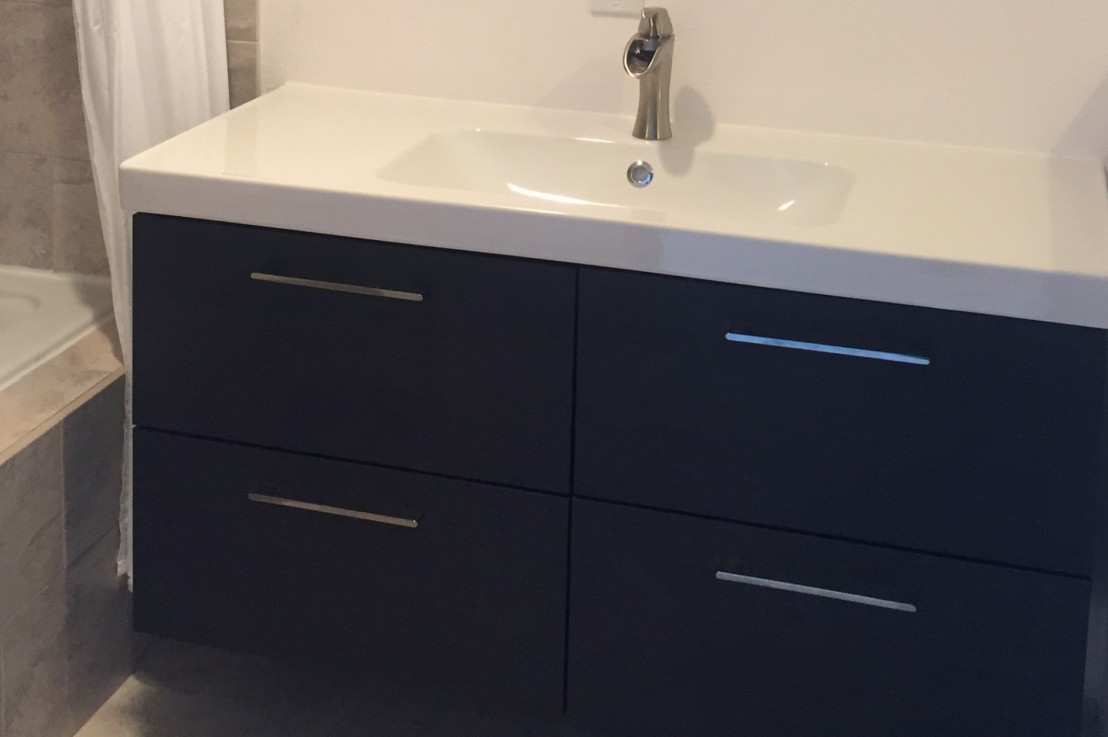 In my last blog I mentioned home renovations, well… life went sideways for a few months as we renovated my husband’s townhome and put it on the market.  I’d say it was his bachelor pad and all that implies… but in our culture that brings to mind pool tables, unclean bathrooms, stale pizza, and empty beer bottles.  While Dan, my husband, DOES have a higher dirty threshold for bathrooms than I do, the reality is that the bathrooms were clean and in 10 years of living there he’d collected almost two rooms worth of Lego and quite a few unfinished projects.

These projects ranged from steel poles he was planning to weld together into a 40 foot radio tower to a master bathroom renovation.  We put the steel into storage but the bathroom – which was torn out down to the studs – needed a bit more time and effort.  The bathroom became my responsibility and as a result I now can install concrete board and dry wall, did a pretty epic job on tiling, and even know how to get a mirror cut down to size.  All tasks not typically associated with a woman’s capabilities.

The master bathroom – I’m now of the opinion that all bathtubs should have a book/wine ledge: 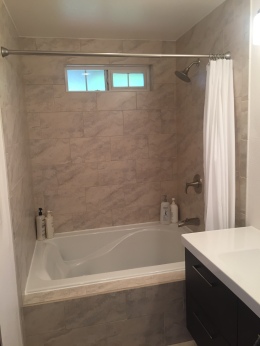 So if I was doing the bathroom, what was Dan doing?  The tasks only he could do.  Either of us could tile and drywall, but only he could decide how to pack up the mounds of Lego or which projects should be given up.  Most couples find a division of labor and planning that works for them, though this might shift over time or with a particular project.  Whether that division falls along traditional gender lines or not, as long as it works and maintains a healthy relationship then I say good for you!!

Dan and I found pretty quickly that renovating a home is a real relationship test – even if you divide out tasks.  I typically made sure we were fed and did the long-term planning in addition to the master bathroom project.  Dan was in charge of all his material goods, the downstairs bathroom (which was also halfway unfinished), and random design details which he absolutely had an opinion about.

Dan’s bathroom design – he designed the look and installed all the tile work and fixtures:

That’s another social expectation gender-bender for us… unlike the stereotype for men, Dan has very strong opinions about design and fashion.  Also unlike the stereotype for women I typically don’t care, or more often have no clue about, what goes together.  (As an example my sister still pokes fun of me for wearing my pants tucked into my socks as a kid, “because it’s warmer”.  What can I say, I get cold easily!)

The thing is, people are proud and excited for me when they hear I built a bathroom.  People do not have the same level of excitement when they hear about Dan’s carefully thought out color schemes and designs.  I believe that if we’re going to cheer for women entering the stereotypical male domain, we should cheer equally as hard for those men entering the stereotypical feminine domain. 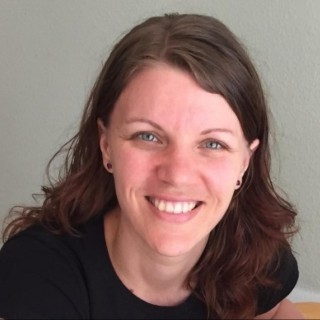